Umbilical-cord blood, now used mostly to treat children with leukemia, could save thousands of adults with the disease each year who cannot find bone marrow donors, two big studies indicate.

A European study found that those who got cord blood were just as likely to be free of leukemia two years later as those who got marrow. A U.S. study looking at three-year survival yielded results almost as promising.

To Dr. Mary Horowitz of the Medical College of Wisconsin, senior author of the U.S. study, the message is clear: Umbilical cord blood can save adults.

Leukemia patients often undergo radiation or chemotherapy to kill their cancerous white blood cells _ a treatment that wipes out their immune systems, too. To restore their immune systems, doctors give these patients an infusion of bone marrow or umbilical cord blood, both of which contain stem cells capable of developing into every kind of blood cell.

Cord blood offers an important advantage over marrow that makes it particularly valuable for use in transplants: Its stem cells are less likely to attack the recipient's body. That allows a wider margin of error in matching up donors and recipients.

But up to now, cord blood has been considered suitable only for children, because each donation has only about one-tenth the number of stem cells in a marrow donation.

The two new studies, published in Thursday's New England Journal of Medicine, suggest that is not a serious impediment.

Both studies were based on records from transplants in the late 1990s and early 2000s.

Using cord blood could improve the odds of getting a transplant for the 16,000 U.S. adult leukemia patients each year who cannot find a compatible marrow donor, said the U.S. study's leader, Dr. Mary J. Laughlin of Case Comprehensive Cancer Center in Cleveland.

Still, Dr. Nancy Kernan, assistant chief of marrow transplantation at Memorial-Sloan-Kettering Cancer Center in New York, said cord blood transplants in adults should be done only as part of studies to look at and improve their effectiveness.

Public cord blood banks _ where blood drawn from umbilical cords and placentas at birth is kept frozen _ need to quadruple their supply to find a match for every leukemia patient who needs one. With 4 million births a year in this country, and most cord blood thrown away, that should not be a problem once more public money comes into play, doctors said.

A federal Institute of Medicine committee is already looking into the best way to set up a national cord blood supply, and is scheduled to complete its report in March.

"I know our committee will consume this study avidly," said Kristine Gebbie, chairman of the group.

The first bone marrow transplants were done in the 1960s; cord blood transplants started in the 1990s. Stem-cell transplants save only 20 percent to 30 percent of the patients who hope to grow new immune systems. But without the treatment, virtually all of them would die.

Some researchers said techniques they have developed in the past two years, since the study ended, already have boosted their success.

Most doctors consider cord blood more appropriate for smaller people, because it contains fewer stem cells than marrow. In the two studies, cord blood recipients tended to weigh less than those who got marrow _ an average of 22 pounds less in the U.S. research, about 18 in the European study.

There are two competing U.S. public cord bank systems, one holding about 38,000 vials, the other 27,000. Together, they do not add up to the supply kept by just one of the 20 or so private banks kept for paying families.

Background Data regarding the outcome of cord-blood transplantation in adults are scant, despite the fact that these grafts are increasingly used in adults.

Methods We compared the outcomes of the transplantation of hematopoietic stem cells from unrelated donors in adults with leukemia who had received cord blood that was mismatched for one HLA antigen (34 patients) or two antigens (116 patients), bone marrow that had one HLA mismatch (83 patients), and HLA-matched bone marrow (367 patients). We used Cox proportional-hazards models to analyze the data.

Conclusions HLA-mismatched cord blood should be considered an acceptable source of hematopoietic stem-cell grafts for adults in the absence of an HLA-matched adult donor. 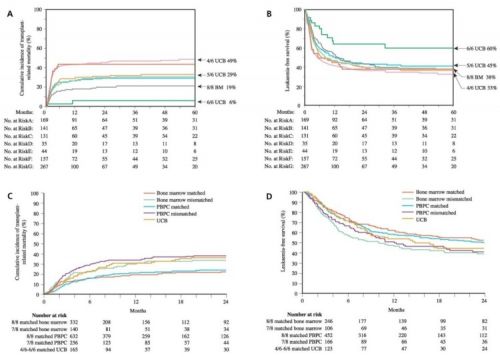 Background Promising results of cord-blood transplants from unrelated donors have been reported in adults.

Methods We compared outcomes in 682 adults with acute leukemia who received a hematopoietic stem-cell transplant from an unrelated donor: 98 received cord blood and 584 received bone marrow. The transplantations were performed from 1998 through 2002 and reported to Eurocord and the European Blood and Marrow Transplant Group.

Results Recipients of cord blood were younger than recipients of bone marrow (median, 24.5 vs. 32 years of age; P<0.001), weighed less (median, 58 vs. 68 kg; P<0.001), and had more advanced disease at the time of transplantation (52 percent vs. 33 percent, P<0.001). All marrow transplants were HLA matched, whereas 94 percent of cord-blood grafts were HLA mismatched (P<0.001). The median number of nucleated cells that were infused was 0.23x108 per kilogram of the recipient's body weight for cord blood and 2.9x108 per kilogram for bone marrow (P<0.001). Multivariate analysis showed lower risks of grade II, III, or IV acute graft-versus-host disease (GVHD) after cord-blood transplantation (relative risk, 0.57; 95 percent confidence interval, 0.37 to 0.87; P=0.01), but neutrophil recovery was significantly delayed (relative risk, 0.49; 95 percent confidence interval, 0.41 to 0.58; P<0.001). The incidence of chronic GVHD, transplantation-related mortality, relapse rate, and leukemia-free survival were not significantly different in the two groups.

Conclusions Cord blood from an unrelated donor is an alternative source of hematopoietic stem cells for adults with acute leukemia who lack an HLA-matched bone marrow donor.

Current excitement in the field revolves around the development of safer techniques to improve homing, engraftment, and immune reconstitution after cord blood transplantation. Here the authors review the past, present, and future of cord transplantation.