Uit de conclusie van de studie: AZD3229 has a superior potency and selectivity profile to standard of care (SoC) agents—imatinib, sunitinib, and regorafenib, as well as investigational agents, avapritinib (BLU-285) and ripretinib (DCC-2618). AZD3229 has the potential to be a best-in-class inhibitor for clinically relevant KIT/PDGFRα mutations in GIST. 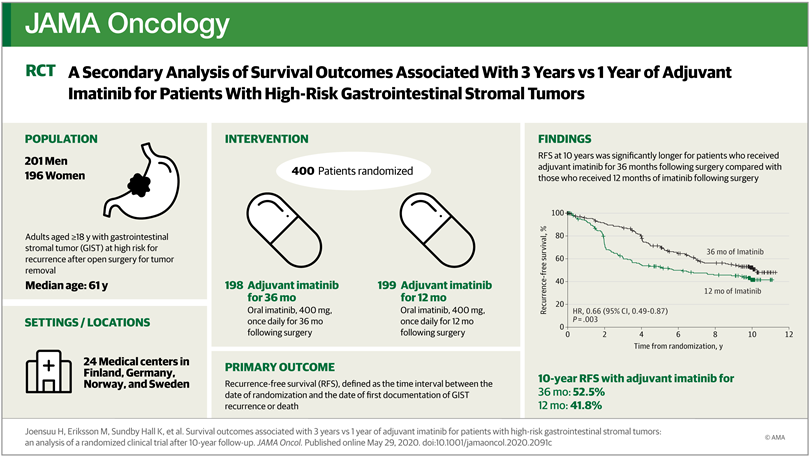 Findings  This secondary analysis of a randomized clinical trial of 397 patients with high-risk GIST found that, after a median follow-up time of 10 years after the study entry, patients randomly allocated to receive 3 years of imatinib had longer recurrence-free survival and OS than patients allocated to 1 year of imatinib: Approximately one-half of deaths were avoided with the longer treatment. No new adverse safety signals were detected.

Meaning  Three years of treatment with adjuvant imatinib was associated with improved OS compared with 1 year of imatinib in patients with high-risk GIST.

Importance  Adjuvant imatinib is associated with improved recurrence-free survival (RFS) when administered after surgery to patients with operable gastrointestinal stromal tumor (GIST), but its influence on overall survival (OS) has remained uncertain.

Objective  To evaluate the effect of adjuvant imatinib on OS of patients who have a high estimated risk for GIST recurrence after macroscopically complete surgery.

Design, Setting, and Participants  In this open-label, randomized (1:1), multicenter phase 3 clinical trial conducted in Finland, Germany, Norway, and Sweden, 400 patients who had undergone macroscopically complete surgery for GIST with a high estimated risk for recurrence according to the modified National Institutes of Health Consensus Criteria were enrolled between February 2004 and September 2008. Data for this follow-up analysis were analyzed from September to November, 2019.

Interventions  Imatinib 400 mg/d administered orally for either 12 months or 36 months after surgery.

Conclusions and Relevance  Three years of adjuvant imatinib is superior in efficacy compared with 1 year of imatinib. Approximately 50% of deaths may be avoided during the first 10 years of follow-up after surgery with longer adjuvant imatinib treatment.