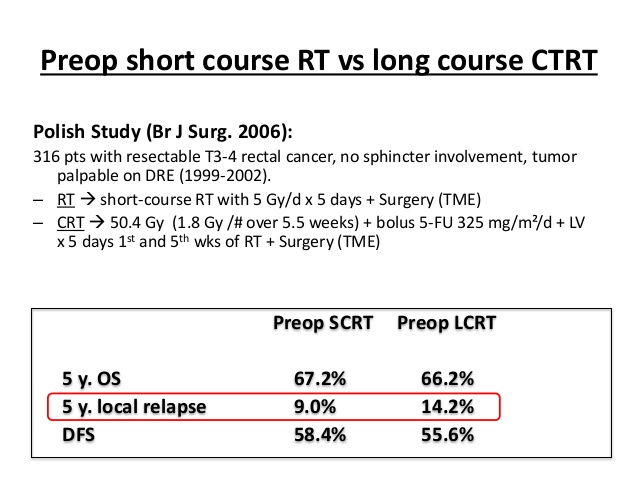 Patients with locally advanced rectal cancer (LARC) who are unfit for chemoradiation (CRT), are often offered short-course radiotherapy followed by delayed surgery (SCRT-delay). This entails a lower radiation dose, no chemotherapy and a shorter treatment period. This may lower their chances for complete tumor response and, as such, organ-sparing approaches. The purpose of this study was to compare the pathological complete response (pCR) rates between neoadjuvant CRT and SCRT-delay in patients with LARC in a nationwide database from the Netherlands.

In the population based Netherlands Cancer Registry, clinical stage III rectal cancer patients, diagnosed between 2008 and 2014, who underwent CRT or SCTR-delay were selected. pCR (ypT0N0), near pCR (ypT0-1N0), and tumor and nodal downstaging were compared between the treatment groups using multivariable logistic regression analysis.

Pathological compete response rates are lower in patients treated with neoadjuvant short-course radiotherapy with delayed surgery than in patients treated with neoadjuvant chemoradiation for locally advanced rectal cancer. This is far from unexpected, since the administered biological effective radiation dose is lower in SCRT. SCRT followed by surgery within 10 days does not induce downstaging, let alone pCR [19]. Moreover, since chemotherapy is eliminated, the lack of a radiosensitizing agent may reduce radiotherapy efficacy [20]. A prolonged interval to surgery increases the pCR rate [, ]. In previous studies the pCR rates following SCRT-delay range from 4.4% to 25%, with intervals to surgery from 4 up to 19 weeks [, , , , , , , , ]. A systematic review found an average increase in pCR rate of 10% in the delayed-surgery group compared to immediate surgery (3–12% and 0–0.4%, respectively) [21]. The Stockholm III trial showed that prolonging the interval to surgery from 1 week to 4–8 weeks increases pCR rates from 2.1% to 11.8% [16]. No differences were found in local recurrence, recurrence-free survival and 5-year overall survival [30]. A comparison between SCRT-delay and CRT for cT1-4 N0-3 tumors showed clinical complete response (cCR) rates of 20% and 34% after a median interval to response evaluation of 10.3 and 8.9 weeks, respectively. cCR was only achieved in cT2N0 and cT3N0 tumors [31]. Similar effects on cT3 tumors have been published [, ]. In our study, pCR rate was 6.5% after SCRT-delay, with a mean interval to surgery of 9.1 weeks. This relatively low pCR rate may be attributed to higher tumors stages (Stage III or cT4N0) in our study population.

In contrast to literature, we did not observe a higher pCR rates when interval to surgery was increased within the CRT group. This corresponds to the results of the phase III randomized GRECCAR-6 trial, where no benefit of a prolonged interval beyond a minimal interval of 11 weeks was found [32].

We observed a lower proportion of near-pCR (ypT0-1) in the SCRT-delay group than in the CRT group. Near-pCR is relevant when local excision as an alternative treatment option is considered, for example for frail patients, to reduce acute and long-term morbidity of surgery, such as anastomotic leakage, bleeding, urinary, and fecal incontinence [, , ].

A higher pathological nodal stage, a higher mean number of examined lymph nodes and a higher mean metastatic/examined lymph nodes ratio (LNR) were observed in the SCRT-delay group compared to the CRT-group. An increase in lymph node yield after neoadjuvant therapy for locally advanced rectal cancer is associated with improved cancer-specific and 5-year survival and lower local recurrence rates [, ]. However, in tumors with (near) pCR a lower number of lymph nodes is found [38]. A high LNR is prognostic for decreased overall and disease-free survival, even in patients with fewer than 12 lymph nodes examined [39]. These findings suggest that prognosis after SCRT-delay for LARC might be worse than after CRT, but the clinical relevance of LNR is still under debate.

To the best of our knowledge, this is the first large, nationwide study that describes the difference in pathological response rates between chemoradiation and short-course radiotherapy in LARC. A limitation of our study is the missing information about involvement of the mesorectal fascia (MRF). According to Dutch Guidelines, SCRT might have been justified in cT3N1 patients with a wide margin (>1 mm) to the MRF. An increased interval to surgery could have increased pCR rates in this group. However, since cT3N1 MRF- patients require immediate surgery after SCRT and we selected an interval to surgery of more than 4 weeks, we assumed most of the cT3N1 in our dataset had an involved MRF and thus needed CRT.

The group of patients that receive SCRT-delay instead of CRT is not clearly defined. Studies have shown that treatment deviation is more common in elderly patients [, , , , , , ], with age and comorbidities being predictive factors for altered treatment [, , ]. Since rectal cancer incidence increases with age and the general population is getting older, clinicians increasingly consider alternative, less aggressive treatment options for the frail LARC patient. More importantly, since per- and postoperative morbidity and mortality rates are increased in the older patient due to complications [, , , ] and postoperative complications have a larger negative impact on physical- and role functioning in older patients [49], organ preservation would be favorable in this particular population. However, if SCRT-delay is mostly offered to elderly patients, and pCR rates are lower after SCRT-delay, elderly treated with SCRT-delay have a lower probability to become eligible for organ-sparing approaches. Novel neoadjuvant treatment strategies for frail patients are needed in order to increase their eligibility for organ-sparing treatments, while focusing on a balance between morbidity on the one hand and optimal function and cure rates on the other. Current studies investigate a combination of short-course radiotherapy and chemotherapy, resulting in increased pCR rates [, , , , ]. However, the risk of toxicity associated with this strategy is likely to be unacceptable in the frail rectal cancer patient. Future studies should look into new treatment modalities where therapy doses can be increased to a level where response rates are higher and toxicity is still tolerable.

The authors thank the registration team of the Netherlands Comprehensive Cancer Organisation (IKNL) for the collection of data for the Netherlands Cancer Registry as well as IKNL staff for scientific advice.

1AC and SH contributed equally to the manuscript.
© 2018 Elsevier Ltd, BASO ~ The Association for Cancer Surgery, and the European Society of Surgical Oncology. All rights reserved.