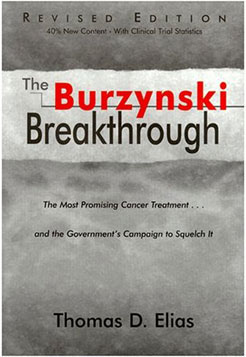 The Revised Edition Of The Burzynski Breakthrough

Editorial Reviews
From Booklist
Stanislaw Burzynski was born to a well-to-do family in Poland in 1942. While in medical school, he became involved in research and eventually discovered peptides in blood and urine that warranted further study as anticancer agents. In 1970, about to be drafted into the army, Burzynski left for the U.S. Given a chance to continue his research in Houston, Burzynski ultimately developed antineoplastons and established a large clinic. During the next 25 years, some 2,500 patients came to him; many of them had "failed" with the generally accepted chemotherapy and radiation treatments. Burzynski infused them with antineoplastons through a chest catheter, achieving successful results in a substantial number of cases. The FDA and organized medicine, however, launched political and legal attacks against him. Elias, whose partisanship is plain, interweaves Burzynski's story and the stories of some of his patients.Thorough scientific studies seem necessary to clarify the currently murky status of Burzynski's treatment. William Beatty --This text refers to an out of print or unavailable edition of this title.

Product Description
There is hope in the fight against cancer, and for thousands of devoted cancer survivors, that hope goes by the name of a Houston, Texas, doctor named Stanislaw Burzynski. This book presents the astonishing story of Dr. Burzynski's revolutionary discovery of antineoplastons, the century's most promising cancer treatment--and the government's decade-long effort to suppress information about it. 30 photos. --This text refers to an out of print or unavailable edition of this title.