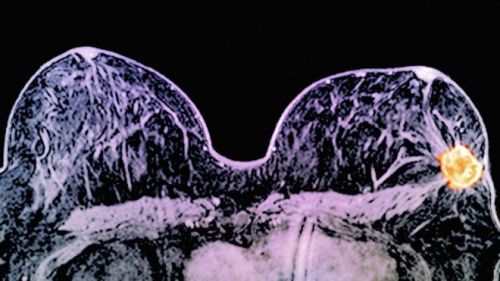 A drug combination – of lapatinib and trastuzumab (Herceptin) – before surgery shrinks and may even destroy tumours in women with HER2 positive disease within 11 days. The results are from a Cancer Research UK-funded trial* being presented at the 10th European Breast Cancer Conference (EBCC10) (link is external) today.

The research may lead to fewer women needing chemotherapy.

“These results are very promising if they stand up in the long run and could be the starting step of finding a new way to treat HER2 positive breast cancers." - Professor Arnie Purushotham, senior clinical adviser at Cancer Research UK

The EPHOS B trial, led by researchers at The Institute of Cancer Research, London, the University of Manchester and University Hospital of South Manchester NHS Foundation Trust, studied 257 women with HER2 positive breast cancer in the short gap between initial diagnosis and surgery to remove their tumours.

In the trial, women were split into three groups and treated for 11 days before their surgery. Initially women were randomised to receive either trastuzamab, or lapatinib or no treatment – but halfway through the trial after evidence from other trials of the effectiveness of the combination the design was altered so that additional women allocated to the lapatinib group were also prescribed trastuzumab.

The trial set out to study the biological effects of the drug combination by measuring biological markers of cellular proliferation after 11 days of therapy. But when trying to measure this, the researchers discovered that in roughly a quarter of the 66 women who received both drugs the remaining tumour was too small for the second measurement of cell proliferation.

17 per cent of the women receiving both drugs had only minimal residual disease – defined as an invasive tumour smaller than 5mm in size – and 11 per cent had a pathological complete response – meaning no biological sign of invasive tumour could be found in the breast.

Three per cent of the women treated with trastuzumab only had residual disease or complete response.

HER2 positive breast cancer is more likely to come back after treatment than some other types of breast cancer. It is generally treated with surgery, chemotherapy, endocrine therapy and targeted anti-HER2 drugs.

Current treatments are effective, and complete response is common after three to four months, but the researchers say observing a disease response after 11 days was very surprising.

Trial co-leader Professor Judith Bliss, director of the Cancer Research UK-funded clinical trials and statistics unit at The Institute of Cancer Research, London, said: “Our trial set out to try to use the window between diagnosis and surgery to find clues that combined treatment with trastuzumab and lapatinib was having a biological effect on HER2 positive tumours. So it was unexpected to see quite such dramatic responses to the trastuzumab and lapatinib within 11 days.

“Our results are a strong foundation on which to build further trials of combination anti-HER2 therapies prior to surgery – which could reduce the number of women who require subsequent chemotherapy, which is also very effective but can lead to long-term side effects.”

Clinical chief investigator and trial co-leader Professor Nigel Bundred, professor of surgical oncology at The University of Manchester and clinical consultant at University Hospital of South Manchester NHS Foundation Trust, said: “These early and significant tumour regressions seen on dual anti-HER2 therapy suggest that we will be able to personalise treatment for these cancers on the basis of early response, allowing us to identify patients who in the future may avoid treatment morbidity or avoid chemotherapy”.

Professor Arnie Purushotham, senior clinical adviser at Cancer Research UK, said: “These results are very promising if they stand up in the long run and could be the starting step of finding a new way to treat HER2 positive breast cancers. This could mean some women can avoid chemotherapy after their surgery – sparing them the side-effects and giving them a better quality of life.”

Cancer Research UK scientists helped establish the link between some cancers and ‘growth factor receptor’ proteins on the surface of cells – a crucial early step in the development of Herceptin. Cancer Research UK also funded the clinical trials unit where the research showing that Herceptin can improve survival for people with a certain type of breast cancer was completed.

A pair of drugs can dramatically shrink and eliminate some breast cancers in just 11 days, UK doctors have shown.

They said the "surprise" findings, reported at the European Breast Cancer Conference, could mean some women no longer need chemotherapy.

Experts said the findings were a "stepping stone" to tailored cancer care.

The doctors leading the trial had not expected or even intended to achieve such striking results.

They were investigating how drugs changed cancers in the short window between a tumour being diagnosed and the operation to remove it.

But by the time surgeons came to operate, there was no sign of cancer in some patients.

Prof Judith Bliss, from the Institute of Cancer Research in London, said the impact was "dramatic".

She told the BBC News website: "We were particularly surprised by these findings as this was a short-term trial.

"It became apparent some had a complete response. It's absolutely intriguing, it is so fast." Read more>>>>>>>>>>