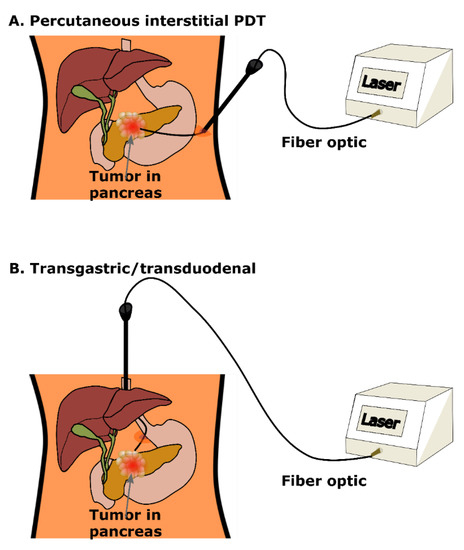 Pancreatic ductal adenocarcinoma (PDAC) is among the most lethal of human cancers. Numerous clinical trials evaluating various combinations of chemotherapy and targeted agents and radiotherapy have failed to provide meaningful improvements in survival. A growing number of studies however have indicated that photodynamic therapy (PDT) may be a viable approach for treatment of some pancreatic tumors. PDT, which uses light to activate a photosensitizing agent in target tissue, has seen widespread adoption primarily for dermatological and other applications where superficial light delivery is relatively straightforward. Advances in fiber optic light delivery and dosimetry however have been leveraged to enable PDT even for challenging internal sites, including the pancreas. The aim of this article is to help inform future directions by reviewing relevant literature on the basic science, current clinical status, and potential challenges in the development of PDT as a treatment for PDAC.

Pancreatic ductal adenocarcinoma (PDAC) is among the most lethal of human cancers. Clinical trials of various chemotherapy, radiotherapy, targeted agents and combination strategies have generally failed to provide meaningful improvement in survival for patients with unresectable disease. Photodynamic therapy (PDT) is a photochemistry-based approach that enables selective cell killing using tumor-localizing agents activated by visible or near-infrared light. In recent years, clinical studies have demonstrated the technical feasibility of PDT for patients with locally advanced PDAC while a growing body of preclinical literature has shown that PDT can overcome drug resistance and target problematic and aggressive disease. Emerging evidence also suggests the ability of PDT to target PDAC stroma, which is known to act as both a barrier to drug delivery and a tumor-promoting signaling partner. Here, we review the literature which indicates an emergent role of PDT in clinical management of PDAC, including the potential for combination with other targeted agents and RNA medicine.

Given the noted role of stroma in PDAC progression and as a barrier to drug delivery, the concept of therapeutically targeting PDAC stroma has emerged as a potentially important strategy. As discussed here, multiple lines of evidence suggest that PDT may have some role to play in this context. In a 3D PDAC co-culture model, it was shown that while the nodules in the presence of fibroblasts were more chemoresistant, PDT response was enhanced in the presence of fibroblasts [78]. Another study on PDAC cocultured with fibroblasts in monolayer showed non significantly higher PDAC cell death in the presence of non-activated fibroblasts [127]. Furthermore, a study demonstrated that PDT not only depleted stromal fibroblasts, but also interrupted crosstalk with stromal signaling partners that gave rise to enhance tumor survival [128]. Combined with additional evidence that PDT can induce breakdown of ECM components [129], these preclinical results collectively indicate a potential role for PDT in depleting cellular and non-cellular PDAC stromal components to enhance subsequent drug delivery. Clinically this scenario could be leveraged by activating the PS at early timepoints following delivery when initial stromal accumulation is highest.
In consideration of how PDT may play a role in the next generation of cancer therapeutics, the opportunity for interactions with RNA medicine emerges as a potentially exciting avenue of investigation. In recent years, RNA medicine has demonstrated exciting potential for a wide variety of diseases, including, specifically, PDAC, through targeting of microRNAs (miRNAs) [130,131,132,133]. MiRNAs are small (~18–25 nucleotides) non-coding RNAs that can bind target mRNAs in a sequence-specific fashion to induce post-transcriptional downregulation. Several studies have already identified miRNAs with significantly altered expression between normal pancreas and PDAC tissues; among them, miR-21, miR-196a, and miR-196b, which are strongly correlated with decreased survival [134,135]. In a mouse model of miR-21 over-expression, it has been revealed that the mice develop tumors in tissue where miR-21 is over-expressed, and that these tumors depend on the continued expression of miR-21 for survival [136]. These lines of evidence highlight the role of ‘oncomiR addiction’ in regulating key pathways promoting tumor growth, survival, and chemoresistance [137]. Furthermore, miR-21 depletion using a nanoparticle to carry an anti-miRNA inhibitor also inhibits organoid growth, suggesting the potential of this approach as a therapeutic strategy [130]. At the same time, this approach opens new potential avenues for synergy with PDT. Inhibition of miR-21 has been shown to increase levels of the pro-apoptotic factor BAX, while PDT with verteporfin is known to target anti-apoptotic factors BCL-2 and BCL-XL [138,139]. Similarly, targeting of another PDAC onco-miR, miR-196b, has also been shown to promote resistance to late-stage apoptosis in PDAC cells [140]. Combination of PDT with selective therapeutic inhibition of these oncomiRs could synergistically increase the Bax/Bcl-2 ratio (pro-/anti-apoptotic) in PDAC cells and tip the balance toward apoptosis in these otherwise stubbornly drug-resistant cells. In addition to synergizing at the molecular level, combination with PDT could also enhance delivery of RNA medicines through depletion of stromal components. As noted above, the notoriously dense fibrotic stroma in PDAC is problematic for delivery of virtually all therapeutic agents, and this may be especially true for RNA medicine. While various anti-miRNA strategies have been discussed for the past decade, a lack of adequate delivery to most disease tissues has restricted current therapeutic uses to liver and kidney disease. Collectively, these observations point to the potential benefits of leveraging nanoparticle delivery systems that could simultaneous carry light-activated agents for PDT to target PDAC stroma for enhanced delivery of RNA medicine agents, while at the same time priming tumor cells for enhanced biological response to these therapies.

Collectively, the literature points to multiple significant roles for PDT in the clinical management of PDAC. The clinical studies discussed above have established the techniques for light delivery which enable PDT as a primary treatment for locally advanced PDAC, which could play a key role especially for disease which is unresectable. However, biological responses to PDT may also synergize with systemic therapies as part of a complete treatment strategy. At the same time, active and ongoing research continues to reveal new roles for PDT and its potential to interact with other promising strategies that are just beginning to emerge.

We gratefully acknowledge funding from the National Cancer Institute to the UMass Boston-Dana Farber/Harvard Cancer Center U54 Partnership (U54CA156734). We thank Oracle and the College of Science and Mathematics at UMass Boston for fellowship support to VK.

The authors declare no conflict of interest.

© 2021 by the authors. Licensee MDPI, Basel, Switzerland. This article is an open access article distributed under the terms and conditions of the Creative Commons Attribution (CC BY) license (https://creativecommons.org/licenses/by/4.0/).